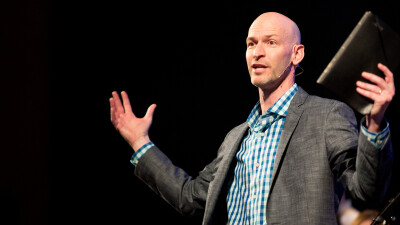 Join us live online for worship, teaching and connection with others in the online Eagle Church community around the world!

Recently I was talking to a friend about all this Coronavirus craziness. At one point in the conversation, he said rather ominously "things are never going to be the same…”. It was one of those statements that suddenly jumps out at you that you find hard to forget; I admit I felt a twinge of fear when he said it.  However, the more I thought about it, the more I thought about the universal truth of it; no matter what happens things will never be the same. This could be said for any event in history, large or small; life never stays the same.

The hard thing about events such as this present pandemic is that we don’t know exactly what it will mean for life moving forward. We live in a broken world where bad things can and do happen and most of us are acutely aware of this. It leaves many people experiencing life like trauma survivors trying to manage powerful impulses to either escape, fight for their lives, or brace for the impact of more trauma. Maybe you can identify with this.

There used to be this comedy routine where a person would share some horrible thing that had happened to them: “My shoes caught on fire!”. The person’s friend would then respond something like  “That’s terrible!”, to which the first person says “No, it’s great because I hated those shoes!”. The friend, newly enlightened, replies “so it’s good…”. This routine goes on until the listener succumbs to old age or turns the channel. It is totally stupid but it captures this little gem of reality: Context is everything.

The exodus of the Israelites from Egypt is an excellent example of this. Initially, Egypt was the mechanism God used to save his people from a great famine. Had it not been for Egypt, God’s covenantal promise to Abraham would likely have ended with Jacob and his family starving to death in a famine. So Egypt is a good thing…right? Well, it turns out that what was initially a good thing became an enslaving thing; a place where the Israelites were brutally oppressed until God, through Moses, liberated them and gave them a land of their own. Which was really the plan all along. The point of the exodus story is not that the Israelites left, but rather where they were going. It is about God’s chosen people moving into the place he created just for them. This land, often described as “flowing with milk and honey”, would be the place where they would prosper and live the abundant life God intended for them.

The redemptive story God is writing is long and characterized at every step by individual events that sometimes create hardship, suffering, and loss. We are seeing this played out in front of us right now as we witness this virus spread across the nation and the ripple effect it has on our economy. All of us are wrestling with feelings of uncertainty and fear. But know this: God is taking us somewhere good. He is at work and fully in control. He is the same God that liberated the Israelites from Egypt, fed multitudes, healed people and raised them from the dead. If we allow his character/ability/motives to be a question in our minds, we are condemned to being blown around by the winds of change as we interpret the events of our times out of context.

Here are some practical ideas for big-picture thinking…